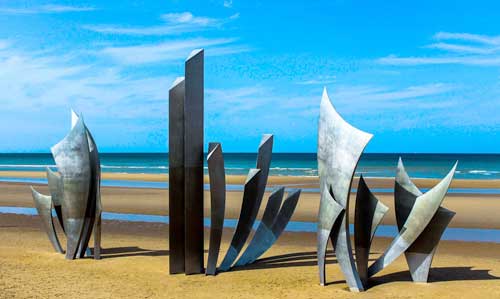 The Sector assigned to the american troops, was 4 miles long and codenamed “Omaha Beach”.
2 infantry divisons were involve.
-1st infanfry division, nicknamed “ the Big Red One”.
-29th infantry division .
-2nd and 5th rangers
The battle was so hard that this beach became in a day “Bloody Omaha.”
Overlooking the beach is the american cemetery where 9386 brave and too young soldiers are resting for the eternity.
Pointe-du-Hoc will amaze you with the bomb craters showing the brutality of the battle.
Morning: From  8.30am to 12.30 am
Afternoon: From  13.30pm to 17.30 pm
Price : From 300 euros 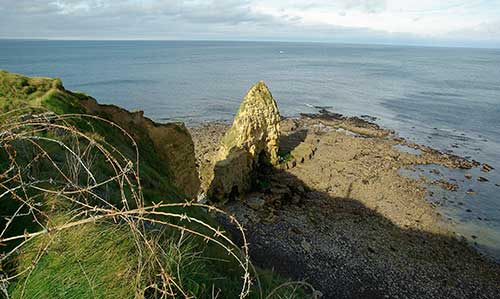 You will stand on the beach exactly where the brave american soldiers gave their life, nicknamed “Bloody Omaha”, on Fox Green Sector where “ the Big Red One, 1st infantry division” was hardly fighting at 6.30 am on Dday…
Full day : From  9.00am to 5.30 am
Price : From 500 euros 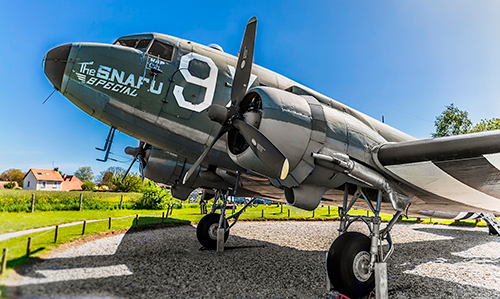 You always had a passion for the airborne troops? You or your children watched “Band of Brothers” many times? This tour is just what you need! Your guide can take you exactly where they landed. Due to friendship with local private owners, you will be able to walk in the footsteps of Dick Winters and the ”Easy Company”.
Price : From 500 euros

You will stand on the beach exactly where the brave american soldiers gave their life, nicknamed “Bloody Omaha”, on Fox Green Sector where “ the Big Red One, 1st infantry division” was hardly fighting at 6.30 am on Dday.
You will then pay respect to them walking through the graves in the american cemetery, overlooking the beach.
Pointe-du-Hoc is also very impressive for the battle and the bomb crateres. The 2nd and 5th rangers had to scale the 100 foot high cliff with grapnels, ladders and ropes.
Lunch time will be in the famous town of Sainte-Mère-Église, your guide Brigitte will recommand you a french typical restaurant or a bakery for a delicious sandwich made with a “french baguette”. Bread is so good in France!
Sainte-Mère-Église was the 1st town to be liberated mainly by the paratroopers of the 82nd airborne division. One of them whose name was John Steele stayed hanging at the church steeple during 2 Hours.
Visit the church with the beautiful stained-glass windows.
Next stop will be on Utah Beach where Teddy Roosevelt Junior landed with the 4th infantry division.
The last spot is an amazing story in the small village of Angoville-au-Plain. Two medics of the 101st airborne saved 80 men in the aid station in the church.
All day long your guide will explain you with pictures and maps so that you can visualise the battle.
If you wish to, we can make a stop at the german cemetery LA CAMBE where more than 21000 german soldiers are buried.
Of course, these are only examples and suggestions of what we can see together.
Your requests are welcome! we are flexible. Just let us know your interests at the time of booking.
During this tour , Brigitte, your guide, will take you back in Time in 1944 in the heart of the action.

During the night of the 5th and 6th of June 13000 american paratroopers where dropped in Normandy.
Two airborne divisions were involved:
The 82nd airborne “All Americans”and the 101st Airborne “The Screaming Eagles”. Their missions were crucial for the success of the ”operation Overlord”.

For the 82nd airborne, size the Cotentin peninsula to stop german reinforcements. For the 101st airborne, secure Utah Beach and neutralize the german defenses.

The “Easy Company”, 101st ID, 506th PID, 2nd battalion is very famous because of the excellent mini-Serie “Band of Brothers”. We will spend the day in the footsteps of Dick Winter’s Men.
The nigtmare for these paratroopers started just after midnight.
Despite many difficulties and heavy losses they succeeded to carry out their Dday objectives.

Put your boots on , we will cross muddy fields and hedgeroes !